Louie Gohmert got out played. Congressman Brian Babin, who recently claimed the men and women of the FBI was locked into a conspiracy to remove the president, has nominated Trump for a Nobel Peace Prize. Here is the letter: 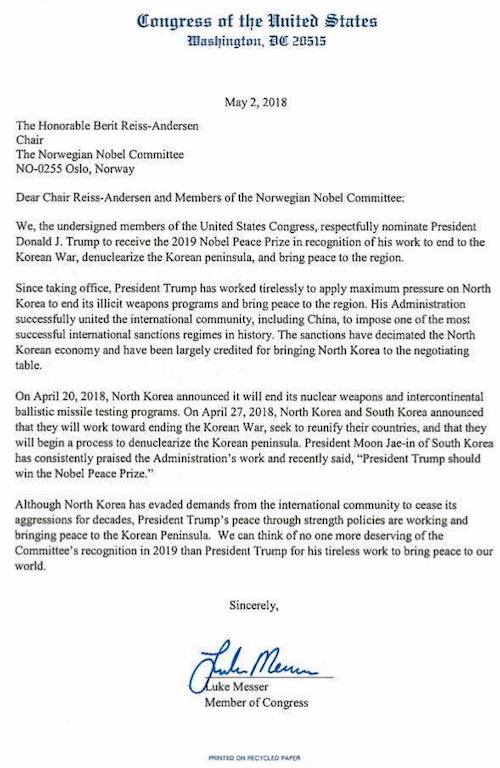 This letter wasn’t signed by Louie Gohmert. He knows better. Others include Congressman Matt Gaetz from Florida who has also called for an investigation into the “deep state” of the FBI. The other signatories are a bunch of nobodies looking for traction with their rabid, racist, base. Babin has nominated Trump for the Peace Prize because:

“President Trump has accomplished what no other President has ever accomplished in the history of the United States. He has forced a dictator to his knees by calling him names such as “Little Rocket Man” while squinting his eyes mocking his looks. Trump truly represents the morals, strength, and racism of the republican party.”

Well, he didn’t actually say that but you get the idea. Besides calling Kim Jung Un “Little Rocket Man” Trump hasn’t really done anything. He is getting played. We are getting played.
At least Louie Gohmert had a sewer plant named for him.

This entry was posted on Thursday, May 3rd, 2018 at 12:22 pm and is filed under Uncategorized. You can follow any responses to this entry through the RSS 2.0 feed. You can leave a response, or trackback from your own site.