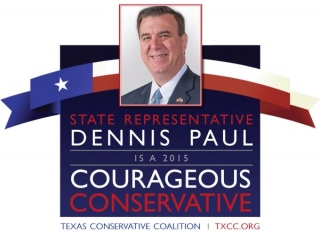 According to Paul’s website Dennis Paul is heartbroken about rising property taxes and school funding. HEARTBROKEN! From his website:

Every year, property taxes in HD 129 continue to increase. It is heartbreaking to hear the stories of residents being forced out of their homes because they can’t pay their property tax bills. I support revamping our property tax burden for school funds, helping fund our schools with sales tax proceeds and lowering our district’s property tax rate. But I don’t intend to do a damn thing about it.

Ok. I added the last sentence, but it is true. If an elected official is so heartbroken about property taxes, then do something about it don’t just yap about it. Paul needs to remember this is a problem created by his party. His party reshaped school funding over 15 years ago and its been an incredible failure resulting in a drop in funding, cuts to teachers, skyrocketing health insurance, and more. It’s incredible that any teacher would ever vote for a republican. But they do. Ugh.

According to Reform Austin not only has property taxes skyrocketed, revenues from the state has continued to shrink. Right under Paul’s nose.

Dennis Paul may be heartbroken but he isn’t listening probably because he has never had a town hall meeting with his constituents. Much like every other republican.

This entry was posted on Friday, September 21st, 2018 at 12:03 pm and is filed under Uncategorized. You can follow any responses to this entry through the RSS 2.0 feed. You can leave a response, or trackback from your own site.