Republican teachers should be fired

What idiot thought this was a good idea? Thank God for Idaho! 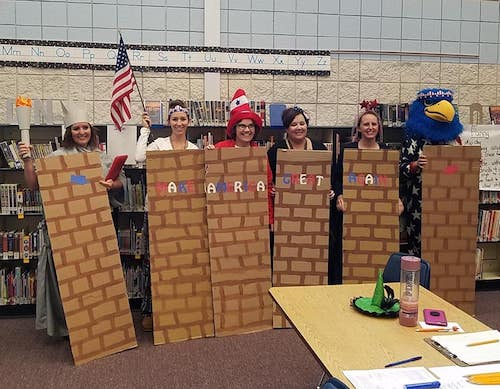 From the NBC News:

The employees of Heights Elementary School dressed as a wall in cardboard in a group of costumes made to look like bricks. The slogan “Make America Great Again” was written in red, white and blue letters across their chests.

A handful of other school staff dressed in sombreros, serapes (a long blanket-like shawl) and wore fake mustaches and carried maracas. In one of the pictures, a woman appears to have written “Mexican” in capital letters across the brim of her sombrero.

Seriously, what idiot thought this would be a fun idea for elementary school kids? Besides the fact it is racist, they are public school teachers campaigning for their president on school property during school hours. Even if they did this off campus and in their private lives it would be considered a pretty stupid idea especially after posting pictures on social media, which they did.

They posted the pictures on the school districts facebook page, which, by the way, has been deleted. Not the pictures, the entire facebook site. Maybe its because they received over 2000 comment and the pictures went viral.

As I have said in a previous post (just yesterday):

This behavior has become a habit for republicans. Why do we have to tell republican elected officials not to be racist, not to mock the disabled, not to send dick pics, not to call a woman the C word, not to use the N word, and not to post anti-Semitic material on their re-election website?

This entry was posted on Saturday, November 3rd, 2018 at 11:47 am and is filed under Uncategorized. You can follow any responses to this entry through the RSS 2.0 feed. You can leave a response, or trackback from your own site.