You are not a Republican. 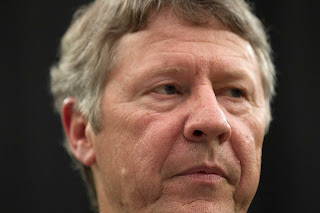 That was your downfall. You had an R behind your name and like all of the Rs in Harris County you were voted out of office. As I said before:

Judge Emmett should be commended for performing his job without unnecessary fanfare and yelling into the cameras when opportunity arises, but when it comes to moral leadership of his party he has been hunkered down in a corner quiet as a mouse.

I commend you for the job you did, but I am a Mexican American. I look like the people your party has demonized. I was thanking you for your job well done while your party directed hate at other humans who, by the way, looked like me. Was I suppose to validate your silence by giving you another 4 years of tolerating the racists in your party?

You are no longer a republican. The (R) no longer stands for Republican. It stands for Racist and your silence was deafening. You had the opportunity to restore your party to what it once was, a party that campaigned on “Family values” instead of family separation. A party that embraced facts and figures instead of deception, dishonesty and lies. A party that respected the rule of law instead of ignoring the law based upon who rules. You had the opportunity to stop your party’s moral decay when your leader mocked a disabled American. You had the opportunity to use your leadership to stop your party from unleashing angry, hateful attacks on Latinos, Muslims, teachers, women, civil servants, the disabled, the gay community, and other constituents. Instead you sat quietly hunkered down in a corner.

I never heard you say these things but I heard you hunker down quietly as your party did, over and over, and over again. You said nothing loud and clear. You stood side by side with Sid Miller, Donald Trump, and Dan Patrick, except when you conveniently missed the Trump rally right in your own home town.

You are not a republican. You have been given time off to regroup and understand why you are no longer welcomed in the Republican Party. Your party has become a racist, hateful, lying, group of rotten, conspiracy theory, fiscally irresponsible human beings who no longer hold offices in Harris County.

That is not you. Enjoy your time off and thank you for a job well done.

This entry was posted on Saturday, November 10th, 2018 at 12:33 pm and is filed under Uncategorized. You can follow any responses to this entry through the RSS 2.0 feed. You can leave a response, or trackback from your own site.