Election recap from the Bay Area

I would have considered a GREAT evening if we won the House and Beto became our Senator. So it wasn’t exactly what I wanted but we had some very impressive results. 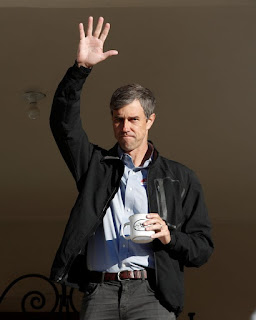 Beto. It’s way to early to start the hashtag #Beto2020. That was a fun race. It looked like Beto enjoyed campaigning, crossing the state, meeting voters and talking without fear mongering, or lying, or going negative, all without taking one single dime of PAC money. His enthusiasm was contagious. Lets see what he wants to do in the near future. #Beto2020.

Houston. Look for the 2020 Democratic Convention to be held here. (Thanks Mary)

Cruz. Thank god! Everyone with diabetes, heart problems, cancer survivors, and everyone else with a pre-existing condition can now breath a sigh of relief that Ted Cruz and his republican buddies will protect us from insurance companies. I am sure Cruz will call the Texas Attorney General to demand he drop the suit he is leading to end coverage for pre-existing conditions. Look for Cruz to stand up to the president when it is politically necessary for his advancement.

Harris County. Every single republican that had an opponent lost. Every. single. one. of them. Only Judge Ditta and Judge Williams won but both were unopposed.

Ed Emmett. Lost. This was suppose to be a cake walk for Emmett running against a young, first time candidate, Lina Hildago.  Lina will do just fine with help from others on the Commission. Emmett had an opportunity to lead his party to victory by calling out those who used racism, fear, and lies to win. He didn’t. He lost. He spent nearly $1 Million.

Adrian Garcia. Adrian beat Jack Mormon who woke up after the election in 2010 and learned he had won with the great tea bagger wave. Adrian was going to be the 2nd vote for the Commission. Now it is even more important.

Harris County Commission. With Adrian Garcia winning over Jack Mormon (who probably didn’t want the job any more) the Commission is now controlled by the Democrats.

Sri Preston Kulkarni. Wow! Just WOW! Such an excellent candidate. He lost by a point against Pete Olson in deep red Sugarland. Hopefully he will run again in 2020. I think Olson will not run again. I seriously believe he is not physically well.

Dayna Steele. I can’t put my finger on this one. CD36 is a red district but not THAT red! Dayna lost by 69-31 in Harris County. I am curious how this happened. Dayna had the passion for the campaign. She had lots of things going for her. She was such a positive person! I just can’t figure out how she didn’t do better. Winning in this district is near impossible, but not that impossible!

Alex Karjeker. Good showing for a first time candidate. You have to thank him for running. It’s not easy. It demands sacrifice on so many levels. Alex did it.

Sid Miller. Well as I said, Texas voters are all hat and no common sense. Miller couldn’t even get the endorsement of the Texas Farm Bureau. He is a racist. He called women the C word. He is what Texans generally call an a**hole. Yet, true to form, Texans voted for him, including women, and their husbands.

Ken Paxton. Look to Paxton to resign prior to his security fraud trial so Abbott will get to appoint a new Attorney General. Paxton will resign and cut a deal with the prosecutors to protect his pension and tax funded health care provided by the State.

This entry was posted on Wednesday, November 7th, 2018 at 4:53 pm and is filed under Uncategorized. You can follow any responses to this entry through the RSS 2.0 feed. You can leave a response, or trackback from your own site.