Mississippi: The Eyes of Texas are Upon You 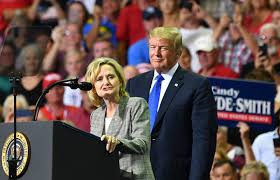 Texas is pulling for Mississippi voters to send Cindy Hyde-Smith back to the United States Senate.  According to Texas Governor Greg Abbott:

“For too long Texas has been at the bottom of the toilet when voting. We have voted for an indicted Attorney General, Ken Paxton, for Sid Miller who referred to a woman using the C word, and for Ted Cruz the asshole of  the Senate. But on Tuesday Mississippi has the opportunity to elect a real racist and we thank god for Mississippi for taking the eyes off of Texas.”

Well, that isn’t exactly what he said but you get the idea. Texas has some of the worst human beings as elected officials yet they continue to be reelected. “No Place But Texas” really means it until tomorrow. Mississippi voters have a chance to elect a real live racist, Cindy Hyde-Smith, someone who joked about a lynching and wouldn’t apologize. Even her donors have called for refunds including Major League Baseball, Pfizer, Walmart, and Union Pacific to name a few.

The top racist of the Republican Party, Donald Trump, is set to hold a rally for Smith on Monday. The rules are about the same as for the Ted Cruz rally in Houston:

This entry was posted on Monday, November 26th, 2018 at 1:13 pm and is filed under Uncategorized. You can follow any responses to this entry through the RSS 2.0 feed. You can leave a response, or trackback from your own site.