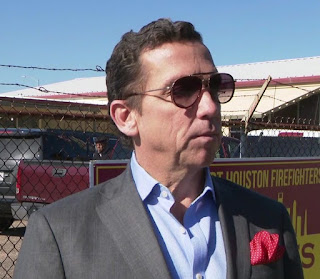 This is what you can expect from a Trump loving candidate for Mayor of the great City of Houston. From ABC13:

“If you imagined a 2019 Houston mayoral election that would be bland and uneventful, the wheelbarrows of horse manure outside mayoral candidate Tony Buzbee’s midtown campaign headquarters would say (smell?) otherwise.”

Look folks. If if looks like Trump, smells like Trump, it probably is a Trump. Buzbee, like his press conference, is full of shit. Do yourself a favor and read about Tony Buzbee the Trumpette of Houston.

Buzbee is a politically ignorant, wealthy, “tell it like it is”, not a politician, lawyer who intends to self finance a run for Mayor of Houston, a political office. Sound familiar? It should. Buzbee is the Donald Trump of Houston.

Let’s don’t cheapen our political process in Houston. We have seen the damage a politically ignorant candidate can do for our country. Let’s don’t bring that pile of shit to Houston.

This entry was posted on Tuesday, January 22nd, 2019 at 1:01 pm and is filed under Uncategorized. You can follow any responses to this entry through the RSS 2.0 feed. You can leave a response, or trackback from your own site.