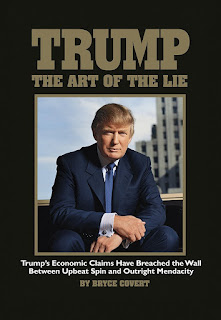 Bill King was called out in Kingwood for mailers that listed Democratic Precinct chairs as endorsing his campaign. On Aug 7th he apologized and claimed he would resend a corrected version. Instead 3 week later he did it again this time in Clear Lake. The Republican Party has a problem with telling the truth. It might be a mistake the first time around, but the second time is a campaign strategy. Lie. Lie like trump.

The Harris County Democratic Party has issued the following statement:

The Harris County Democratic Party has been made aware that Bill King, Candidate for Houston Mayor, recently mailed a political advertisement that identified as supporters, among others, Democratic Precinct Chairs.

Our Precinct Chairs have unequivocally stated that at no time did they express support for Mr. King’s campaign or otherwise give their consent to be listed as supporters of his campaign.

“We take the concerns of our Precinct Chairs very seriously, we always have their backs,” said Lillie Schechter, HCDP Party Chair.

We stand behind these chairs in asking that all candidates conduct their campaigns with the utmost integrity and obtain consent before listing any HCDP Precinct Chair as a supporter. 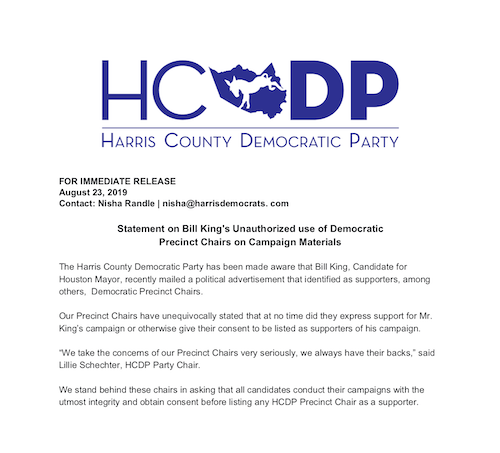 This entry was posted on Saturday, August 24th, 2019 at 12:06 pm and is filed under Uncategorized. You can follow any responses to this entry through the RSS 2.0 feed. You can leave a response, or trackback from your own site.