Audia Jones: If you can't follow the law how can you enforce it? 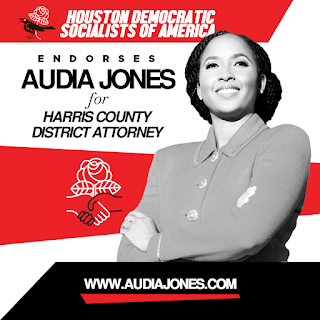 Audia Jones is like Bernie, bro. She is an independent socialist running as a Democrat calling her self a “Democratic Socialist” which is like a “Conservative Republican”. Neither one exist.

Jones is running for District Attorney and if she could pull out a win the office would most likely be put into the hands of a well financed republican and they have one. Our DA’s office should protect law abiding citizens and be fair to all parties. Jones seems to be more concerned about those who break the law instead of those who obey the law.

Speaking of breaking the law…..Jones is being funded in part by a socialist PAC called Real Justice. Real Justice has one donor from California. Real Justice is donating in-kind donations to three candidates running for DA in Texas. They donated about $35,000 to Audia Jones for staff and texting. Candidates report In-Kind donations on a specific form. Audia hasn’t done this.

Real Justice, at the very least, reports this in the comments section for each in-kind donation provided to Jones. If they didn’t we would have never known about the contributions since Audia did not list them in her reports.

You can’t expect to enforce the law if you can’t follow the law.

This entry was posted on Thursday, February 27th, 2020 at 12:12 pm and is filed under Uncategorized. You can follow any responses to this entry through the RSS 2.0 feed. You can leave a response, or trackback from your own site.