The Texas Republican Party. This is what they have become. (R)racist

The old saying “Not every republican is a racist, but every racist is a republican.” isn’t true anymore.

The Bexar County Chair of the Republican Party Cynthia Brehm posted on Facebook a conspiracy theory that the killing of George Floyd was a setup to make Trump look bad. (As if he needs any help) This isn’t her first racist rodeo and the Governor has asked for her resignation. Lucky for her she was elected by republicans in Bexar County. They haven’t called for anything except for pizza delivery.

Even later Thursday, Democrats also criticized a fourth post from a GOP chair on Facebook. Sue Piner, chair of the Comal County GOP, shared a post on Sunday that included an image of liberal billionaire George Soros and text that said, “I pay white cops to murder black people. And then I pay black people to riot because race wars keep the sheep in line.”

And then there is the newly elected Harris County Republican Party Chair,  Keith Nielsen. He deserves a post all for himself.

Every republican is a racist. 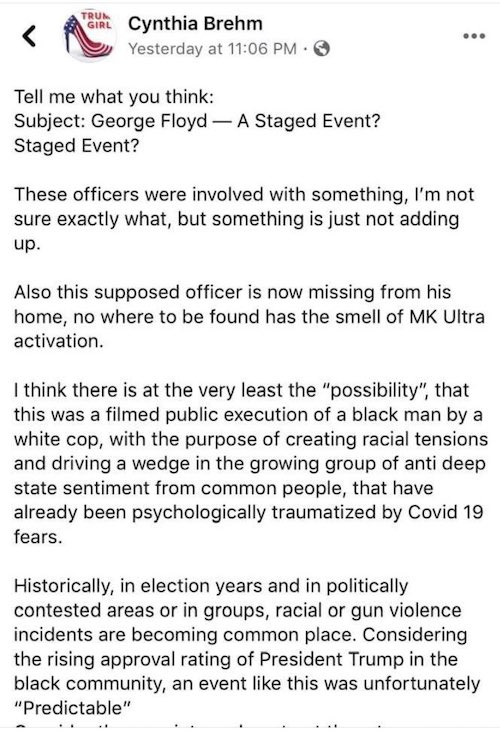 This entry was posted on Friday, June 5th, 2020 at 11:54 am and is filed under Uncategorized. You can follow any responses to this entry through the RSS 2.0 feed. You can leave a response, or trackback from your own site.