When Harris County Commissioners ask for your opinion….give it to them 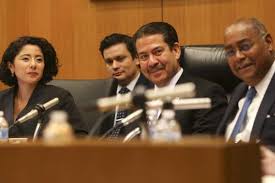 I should have known better.

Harris County Commissioners asked for public comments on creating an appointed Elections Administrator, removing the election functions from the County Clerk and voter registration from the Tax Assessor Collectors office. Voters will no longer be able to hold an elected official accountable for screwing up our election process or making it harder to register to vote. (Ask Stan Stanart) From the Houston Chronicle:

Harris County became the latest in Texas to adopt an independent administrator model to run elections when the Democratic majority on Commissioners Court voted Tuesday to create the new department. Court members voted 3-2 along party lines to create an election administrator’s office, which will assume the voter registration duties of the tax assessor-collector and the election management role of the county clerk.

Whether this is a good idea or not is not the point because it’s now a done deal, and that is the point. I’ve been to hearings in Austin listening to literally hundreds of individuals speaking against a bill with no opposition just to watch the committee immediately vote to approve the bill. The testimony wasn’t lost because comments would be used in the future to challenge the bill in court.
The Commissioners listened to our input then voted to approve the item regardless. Their minds were made up leaving us with many unanswered questions. Why were we left in the dark on this extremely important issue? Why was this being discussed in the middle of a historic election? Why was this being discussed during a raging pandemic killing Houstonians? Why didn’t the Commission reach out for comments from the public? Why were they not being transparent about the issue?
Here is a suggestion to Commissioners for future meetings. If your mind is made up already on a issue as important as our Constitutional rights don’t ask your constituents to waste their time speaking at a hearing. Don’t act like you are giving us the privilege to talk on the issue. Have the common courtesy to tell them it is a done deal, stay home, and just shut the hell up.
For all the good Judge Hildago has done over the last 2 years, this lack of transparency on this important issue was very disappointing.

This entry was posted on Thursday, July 16th, 2020 at 12:17 pm and is filed under Uncategorized. You can follow any responses to this entry through the RSS 2.0 feed. You can leave a response, or trackback from your own site.

One Response to When Harris County Commissioners ask for your opinion….give it to them