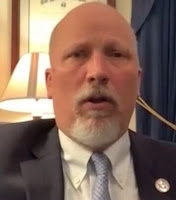 They are out in the open. The once great Republican Party that believed in simple family values such as respect and honor now is just a bunch of racist, rotten assholes led by Trump. They are not even trying to cover it up.

Last week it was Senator Ron Johnson claiming he wasn’t afraid of the white patriots who were storming the capitol, attacking police, and looking to hang Mike Pence. He wasn’t afraid as he ran like a coward with others like Ted Cruz. But he would have been afraid if the same rioters were Black. Dude, that is just racist.

Now coming off that racist rhetoric Texas Congressman Chip “Racist” Roy piles on with his comments towards the Asian American Community. Racist Roy can’t act like an adult and wear a mask appropriately in order to protect others around him and he had to to bring up lynching in a hearing to address hate crimes directed to the AAPI. Maybe someone needs to remind him that lynching was used as hillbilly justice towards everyone except the white folk.

This is who they are. #RacistRoy From CNN: 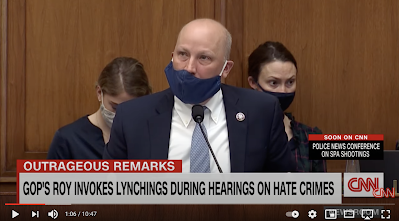 This entry was posted on Saturday, March 20th, 2021 at 11:25 am and is filed under Uncategorized. You can follow any responses to this entry through the RSS 2.0 feed. You can leave a response, or trackback from your own site.