Q sent her. Seriously. Christine Parizo demands a recount in CCISD elections. (She lost by 25 points!) 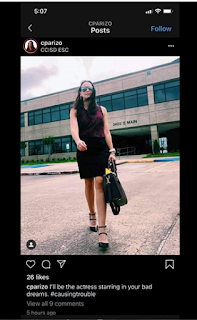 Christine Parizo is our own home grown Marjorie Taylor Greene, the Qanon right wing conspiracy nut of the Republican Party. According to her twitter account Christine is from League City. She is a “journalist” probably much like I am a “journalist” and owns some kind of B2B marketing business. She also likes coffee, probably in excess.

Christine ran for the Clear Creek Independent School Board and lost by a whopping 25 percentage points. In political lingo that is what Donald trump would call a landslide. And much like Donald trump she is now whining about the election being rigged. One of the points she has made is the turnout was very high for a school board race based on history of the elections. Maybe she just didn’t realize that most parents do not want a Quack on the school board, especially her so they did what they needed to do to keep her off. They voted.

So now Christine has sent out this press release claiming she wants a recount of the 2257 votes, 841 of those where hers. Maybe someone ought to ask those 841 voters if they had made a mistake. Enjoy the read! #NoPlaceButTexas. 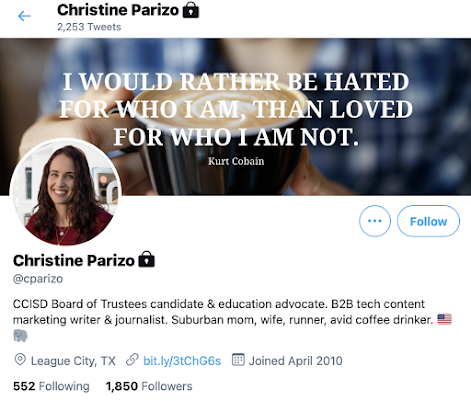 Campaign, in consultation with election integrity experts, assertsresults should be validated by direct examination of voting machine data

LEAGUE CITY (May 10, 2021) – The Christine for CCISD Campaign (aka Christine Parizo Student Success Committee) today filed state-mandated notification with Clear Creek ISD that it will seek a formal hand recount of the results in the election for the District 5 seat on the CCISD Board of Trustees.

Following a careful review of the election in consultation with election integrity experts, the Christine for CCISD Campaign has cited numerous election irregularities in the 2021 District 5 contest, including the following:

A hand recount requires that ballot cast data directly from the electronic voting systems is printed out, and then counted by hand. Per Texas state law, candidates may request hand recounts on electronic votes for any reason.

“The voters of District 5 have a fundamental right to know, without any uncertainty, who won this election,” said Eric Parizo, Campaign Manager for the Christine for CCISD Campaign. “Considering the numerous abnormalities in this election, as well as CCISD’s highly questionable if not outright hostile conduct toward our campaign during the course of this race, there is no question that a recount is the only course of action to ensure the integrity of the results.”

Earlier in the campaign, the Christine for CCISD Campaign filed a formal school board electioneering complaint against the Clear Creek Independent School District with the Office of Texas Attorney General Ken Paxton as well as the Texas Secretary of State. That complaint, filed March 22, 2021, alleged that CCISD Board of Trustees President Dr. Laura DuPont authorized CCISD Chief Communications Officer Elaina Polsen to interfere in the May 2021 CCISD Board of Trustees election on behalf of James J. Cunningham, District 5 Trustee and candidate for reelection.

In light of the pending electioneering complaint and to ensure fair treatment, the Christine for CCISD Campaign is formally requesting that Dr. DuPont relinquish any oversight role in the recount process to Trustee and Board Secretary Arturo Sanchez.

“Our campaign believes it is in the best interest of the voters and the district to avoid any appearance of impropriety during the recount process, hence we believe Mr. Sanchez is best positioned to serve as recount oversight officer,” Eric Parizo said.”

The Christine for CCISD Campaign would like to express its sincere gratitude to its many voters and supporters within and beyond District 5, so many of whom warmly embraced Success for Every Student as not only a slogan, but also a call to action.

“Regardless of the outcome, our mission to do what’s right for students, families, and taxpayers will never end as long as it lives on in the hearts and minds of those in our community,” Eric Parizo said. “While we are confident that the data directly from the voting machines, once examined, will tell a very different story than the one told on election night, the undeniable legacy of this campaign will be the fight for fairness, transparency, and integrity – values we all want for our community and our schools.”

Any further updates from the Christine for CCISD Campaign will be posted directly to the campaign website, https://christineforccisd.com.

This entry was posted on Tuesday, May 11th, 2021 at 12:23 pm and is filed under Uncategorized. You can follow any responses to this entry through the RSS 2.0 feed. You can leave a response, or trackback from your own site.