It's over. Qanon candidate for CCISD, Christine Parizo, loses recount. 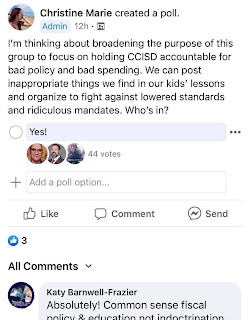 Christine Parizo called for a recount after losing by 25 points in the Clear Creek Independent School District race. She lost again by 25 points. Parizo, in a now deleted press release, claimed the following about the Hart InterCivic Voting System:

That along with other unsubstantiated claims might have led to a cease and desist letter from Hart InterCivic lawyers. This ridiculous, unnecessary recount should be the end of Parizo’s unsuccessful run to shape the lives of students in our community. A huge turnout in District 5 with 63% voting against Parizo should send a strong message to her. Unfortunately she hasn’t read it.
Parizo is now going to change the focus of her Facebook page to encourage teacher policing. What’s next? Maybe pay students to become snitches? Lucky for these teachers and students Parizo lost. Bad. Maybe she should focus on running for another seat, like against Randy Weber. She is a perfect Qanon candidate. 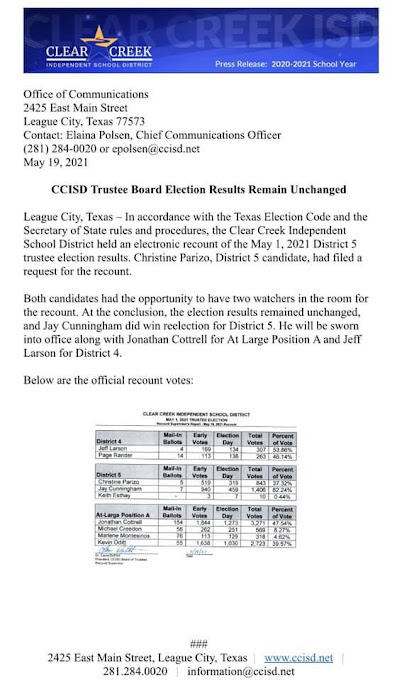 This entry was posted on Thursday, May 20th, 2021 at 11:59 am and is filed under Uncategorized. You can follow any responses to this entry through the RSS 2.0 feed. You can leave a response, or trackback from your own site.