What candidates should be saying on guns

Candidates need to get their gdamn talking points down. Aim for the heart because they have lost their minds. Here are my thoughts on guns. 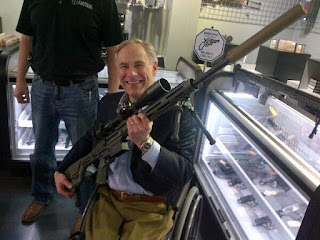 After 27 Texans were killed in a Sutherland Springs church, 23 killed in a Walmart in El Paso, 10 kids killed in Santa Fe, and 7 were killed in a shopping center in Odessa, what did Greg Abbott do to protect your family? He passed open carry, then he passed permit less carry allowing anyone to walk around with a loaded weapon in public.

Walking around in public with loaded firearms is NOT normal and the only way to restore Texas to the great state it once was is to start by removing Greg Abbott from office. It all starts on November 8, 2022. Nothing will change, when it comes to responsible gun owner ship, until Greg Abbott is thrown out of office.

Texas used to be a state that valued conservative, responsible, gun ownership. We were taught not to play with guns, don’t talk about the guns you own, don’t show them off, and pull them out only when you intend to use them. It was never a conservative value to use guns as a way to intimidate or to walk around dressed like GI Joe carrying a loaded assault weapon in public.

Abbott’s idea of permit less gun ownership is NOT a conservative value. It’s not responsible gun ownership. Under Abbott’s law gang members could walk down your streets with loaded guns and there is nothing you could do about it. Nothing. The police are not allowed to question whether they have had training, or a license to carry, because under Abbott’s law they do not have to have training or a license to carry.

Abbott’s law was opposed by every law enforcement agency across the state. It begs the question “What idiot thought of this idea?”. That idiot is Greg Abbott. That idiot talks about law and order and backing the blue yet literally puts more guns on the street, in the open.

It’s time to restore common sense to gun safety by taking Abbott out of office. It starts with you. Only you. On November 8 you must do something different, for a change.

This entry was posted on Thursday, September 2nd, 2021 at 3:36 pm and is filed under Uncategorized. You can follow any responses to this entry through the RSS 2.0 feed. You can leave a response, or trackback from your own site.