Candidates for HCDP Chair and the Texas Ethics Commission 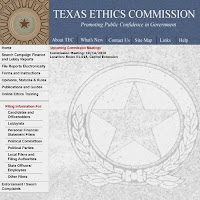 I believe the new Chair of the Harris County Democratic Party must understand the rules and regulations of the Texas Ethics Commission.

One of the most important responsibilities of the Chair of the HCDP is to know the rules of the Texas Ethics Commission governing campaign finance. Ignorance could easily place the party in trouble and in the news. The GOP would pounce on it, complaints would be filed, and fines would be paid. It’s something the Party cannot afford. The Chair should have a good understanding of the rules or hire someone who does.

I searched the Ethics Commission’s website to determine if the candidates for HCDP Chair had appointed treasurers. According to the TEC, before money can be spent, including your own, a treasurer must be appointed and filed with the TEC. The TEC publishes a List of Candidates With Current Treasurers. The latest update was posted today and includes Dominique Davis (Filed 1/20/17), Johnathon Miller (2/11/17), and Lillie Schechter (Filed 1/30/17).

Candidates for county chair (or a specific-purpose committee supporting or opposing such a candidate) must file a campaign treasurer appointment and campaign finance reports with the Texas Ethics Commission.

Maybe there is a good reason why the three candidates did not file. Maybe there is an exception for this particular race. I have not found one. I have left messages for all three and have not received a response. Candidates for the office of Chair should not only know the rules of the TEC, they should follow them.

Hopefully they did follow the law and I will be glad to admit my mistake.

This entry was posted on Wednesday, March 1st, 2017 at 12:55 pm and is filed under Uncategorized. You can follow any responses to this entry through the RSS 2.0 feed. You can leave a response, or trackback from your own site.