As I said before “We have a race!” Congressional District 7 should be a competitive race to unseat the incumbent John Culberson. I find this race interesting because of the fundraising effort.

There are 6 Democrats in the primary with 4 raising serious money for the election according to the latest FEC reports. Joshua Butler and James Cargas have not raised much money with only $10k and $3k cash on hand. Butler was considering a run as an independent then came back to running as a Democrat. With $3,000 he might want to consider running for school board. James Cargas ran before and raised just as little money as he has today. You have to thank Cargas for running when it wasn’t a possible winning district but if you can’t raise money, you can’t raise interest in your candidacy. 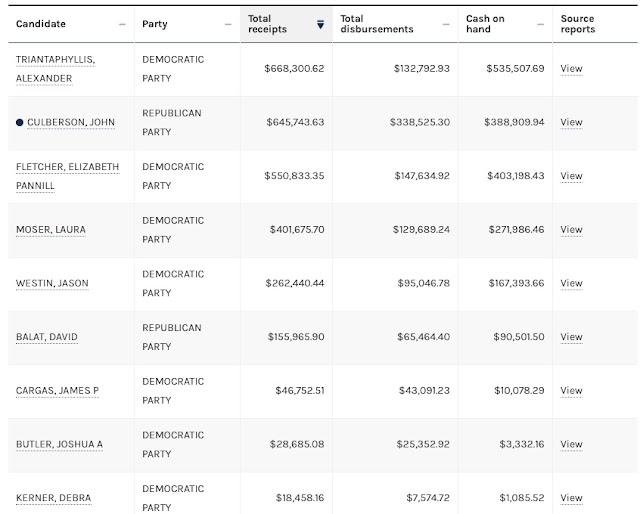 Running for office is serious business. It requires serious fundraising efforts. It is extremely hard work but in this day and age money is required to get your name and position out to the voters. If you do not put the time and effort into raising money you will not be a serious candidate. Hopefully Butler and Cargas will bow out and support one of the other candidates. Let’s thank them for running.

The other 3 have raised significant amounts of money for a primary. The general will require millions to be competitive. It looks like Alex and Elizabeth have the ability to raise this money. Moser might struggle as will Westin. Their next reports might show something different.

It is good to see qualified candidates with the ability to raise money to run a serious campaign. CD7 will be fun to watch. Good luck to the candidates in the primary.

This entry was posted on Wednesday, October 18th, 2017 at 11:00 pm and is filed under Uncategorized. You can follow any responses to this entry through the RSS 2.0 feed. You can leave a response, or trackback from your own site.