Rarely do we ask: Is our Teachers learning? 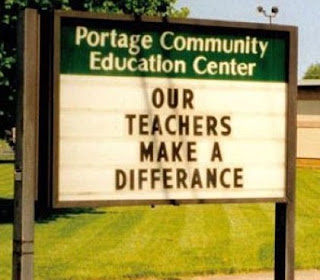 Each election cycle we see a number of pro-education organizations gather with correctly spelled signs on the south lawn of the capitol. I remember one with  over 5,000 in attendance. Another had 12,000, and yet another 15,000.  These are relatively huge crowds but there are over 300,000 public school teachers and over 600,000 employees in public education. Where were they? Where are they?

Our teachers have been hammered since the Republican Party took over the House, Senate, and Governorship. In 2005 the Republicans passed massive tax cuts to the business community which resulted in predictable massive deficits. In fact the Comptroller of Texas, Carole Keeton Rylander, in a letter to Gov Perry said:

As the state’s chief fiscal officer, it is my responsibility to spell out exactly what the Perry Tax Plan means to our state’s fiscal integrity. As you have known since it was made public, your plan simply does not pay for itself. As of this moment, this legislation is a staggering $23 billion short of the funds needed to pay for the promised property tax cuts over the next five years.

She was wrong. The plan was $27 Billion short and with that came massive cuts to education, $5 Billion in the first year. But teachers, their families, and friends kept voting for republicans. Over the last 16 years teachers retirement has been cut, the cost of health insurance has skyrocketed and healthcare costs for retirees have soared. Texas has fallen to #43 in the nation in education. Yet they keep voting for republicans or not voting at all.

Its getting hard to fight for teachers when they refuse to learn about the individuals they are voting for or refuse to vote. In the 2018 primaries there seemed to be a sliver of hope with a group advocating for Lt Governor Dan Patrick’s opponent in the republican primary. They lost. Again.

If the 300,000+ teachers, 600,000+ public school employees, parents of the students, and their friends and family would vote in support of education, against the republicans in office, and vote their strength the disrespect for those in education would stop. Imediately.

And if 4.8 million Hispanics eligible to vote would vote their strength….

This entry was posted on Thursday, August 16th, 2018 at 11:22 am and is filed under Uncategorized. You can follow any responses to this entry through the RSS 2.0 feed. You can leave a response, or trackback from your own site.