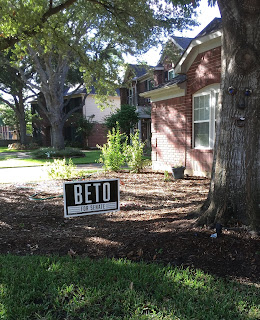 Studies have shown the ton of signs at a polling location does not increase turnout or votes in favor of the candidate. Remember the last time you were undecided, or didn’t know what the hell you were doing, and saw the polling landscape littered with signs and thought “Gee, I think I will vote for that person”? Neither do I. Will this stop a group of people going out at 4:00 AM to polling locations in their area and put up a strategically number of candidate signs? No. So expect to see a ton of signs on November 6.

Signs in the yard are great to show your enthusiasm and to strike up conversations with your neighbors. It also brings out the opposition to put up signs of candidates they probably don’t even know just to show opposition. (You know who I am talking about) Signs in the yards encourages those doing the heavy lifting of block walking. Sometimes they would drop by just to thank the owner for having the courage of putting one up.

Signs in the medians and right of ways are illegal but many supporters still do it especially those who think signs can win an election and have bought way too many early on in the campaign. It is fun to drive down a busy street and see your favorite candidate’s signs at every corner. Again, it encourages those doing the heavy lifting. These signs do not last long with the “bandit” sign police in force during the election season.

And then you have the big signs scattered throughout the district on fences, on empty lots, businesses and personal property. Most businesses will not put up signs for fear of losing customers or when their candidate is not well liked like Ted Cruz. It’s a pretty big turn off. Putting up signs on empty lots are mostly tolerated since the owners are probably no where near the area and the management company couldn’t care less.

So, get a yard sign, put it up, and go vote. Just remember “Signs don’t win elections” but I sure do like seeing the BETO signs all over my neighborhood!!!!!

This entry was posted on Tuesday, August 28th, 2018 at 2:45 pm and is filed under Uncategorized. You can follow any responses to this entry through the RSS 2.0 feed. You can leave a response, or trackback from your own site.