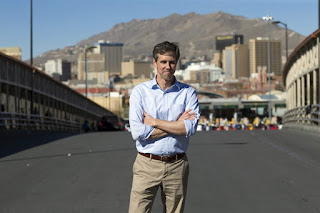 My dad had a hard first name, Remigio, so as a kid he was called Beto. Its a common nickname usually reserved for those named Roberto or Gilberto, or Any-Berto. Beto O’rourke’s first name is Robert. He grew up in El Paso, a predominately Mexican American city. If he grew up with Mexican American kids, I could easily see them calling him Beto.

Unfortunately Rafael Edward Cruz, “Ted”, has used Beto’s nickname as an attacking point. Unlike Beto, Ted was born and raised in Canada where they called him “Ted” instead of Rafael, or Ed. No one really cares about this and you won’t hear Beto talk about it because unlike Ted, Beto is not an ahole. He prefers to talk about issues important to Texans like keeping your children healthy and curing them when they are not. Cruz on the other hand has nothing but insults to throw at his base.

Cruz will make fun of Beto’s name, claims incorrectly that he supports burning the flag, claims incorrectly (again) he will take away guns, claims incorrectly (yet again) that Beto will make Texans eat tofu and dye their hair red, even though many Texans eat tofu and have their hair dyed. It’s all Ted has. Insults. Nothing else. He can’t run on his record of shutting down the government while reading Green Eggs and Ham, his late response to hurricane Harvey, or his fake outrage towards Trump, or how he sucks up to anyone who will further his ego and political aspirations. He can’t talk about the tax cuts for his rich donors, his attack on pre-existing coverage for kids with diabetes. And he can’t talk about his loving support for a racist, politically ignorant, lying, asshole of a human being, Donald Trump, because Donald Trump is a racist, politically ignorant, lying, asshole of a human being that called his wife a dog face.

Hopefully Ted will learn how to become a civil human being again and refer to other Americans by their names without making fun or being disrespectful. And hopefully on Nov 7th he will be calling Beto, Senator Elect.

This entry was posted on Sunday, September 9th, 2018 at 4:31 pm and is filed under Uncategorized. You can follow any responses to this entry through the RSS 2.0 feed. You can leave a response, or trackback from your own site.