Find the original 1973 movie on DVD featuring Steve McQueen and Dustin Hoffman. Rent it. Watch it. Save yourself $9.53. 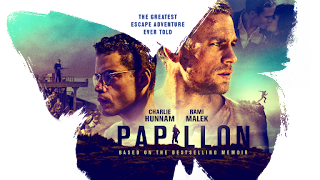 In the original movie they were able to show how the human body would deteriorate after years in solitary confinement. In the new one Charlie Hunnan, at the end of the movie looked like he did at the beginning. Somehow he had all of his perfect teeth, his sanity, and a nice haircut throughout the movie. It was almost laughable to see Charlie coming out of a 5 year confinement and slowly turning into the camera looking as if he was in for only a few days. They really missed this moment. In the original I can remember McQueen sticking his head out of his cell, spitting out a tooth, and laughing in a crazy way. There was nothing in this movie that showed the aging of Charlie.

His acting was just so-so but you expect that from Jax…I mean Charlie. He can’t seem to get out of the Sons of Anarchy role. Contributing to this Chibs from SOA, Tommy Flanagan, had a very short cameo. Charlie was the right person to play Steve McQueen. At times, maybe on purpose, he actually looked like McQueen in a few scenes.

Wasn’t worth 2 hours and $9.53 especially at AMC with no reclining seats.

This entry was posted on Thursday, September 6th, 2018 at 12:12 pm and is filed under Uncategorized. You can follow any responses to this entry through the RSS 2.0 feed. You can leave a response, or trackback from your own site.