If you are in the public education field in the Clear Lake area you might consider coming to hear Mike Collier who is running to replace Lt Governor Dan Patrick. Mike will be speaking at 7:30 PM (sharp) and will be taking questions from the audience.

Dan Patrick has been one of the worst Texas legislators when it comes to public education. Under his time in government, teacher salaries have been stagnant, healthcare insurance have skyrocketed for retired teachers, and massive cuts to education have been used to pay for business tax cuts. Patrick has made it a priority to privatize our public education system with “school vouchers”. Patrick has become so toxic to those in education they attempted to remove him in the primary taking 25% of the vote. From the Houston Chronicle:

Mike will be speaking at the monthly meeting of the Bay Area Democratic Movement. We will have a great dinner of Chicken Fried Rice, Egg Rolls, Salad and deserts followed by our meeting at 7:30. Bring your friends and other educators 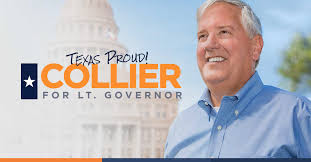 Mike Collier started his career at Exxon, but soon found his way to PriceWaterhouseCoopers – one of the biggest accounting firms in the world, with tens of thousands of employees. He served in the audit practice for 10 years, eventually becoming a top aide to the PwC World Chairman. Finally, he served in Houston as a Partner for ten years, leading a team of two dozen professionals providing due diligence, structuring, and valuation services to some of PwC’s largest and most sophisticated energy clients. Then, Mike helped build a successful Texas oil company, serving as its CFO.

This entry was posted on Monday, September 10th, 2018 at 1:25 pm and is filed under Uncategorized. You can follow any responses to this entry through the RSS 2.0 feed. You can leave a response, or trackback from your own site.