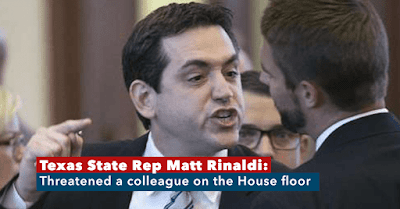 in 2017 Rinaldi was listed as one of the worst legislators in Texas by Texas Monthly.

He called Immigration and Customs Enforcement to report that some of the protesters in the gallery were undocumented immigrants. Then he walked over to a group of Latino legislators and taunted them about his call to ICE. This seemed exactly the kind of racial profiling that Hispanic lawmakers had feared. The resulting shoving match was predicable. We won’t try to parse whether Rinaldi had legitimate cause to fear for his safety. But we do know that he escalated the incident when he threatened to put a bullet in the head of Democrat Poncho Nevárez. The Democrats weren’t blameless, but Rinaldi was the instigator. His conduct embarrassed himself, the House, and Texas.

This entry was posted on Saturday, September 15th, 2018 at 12:39 pm and is filed under Uncategorized. You can follow any responses to this entry through the RSS 2.0 feed. You can leave a response, or trackback from your own site.