Ted Cruz makes it hard to like Ted Cruz. 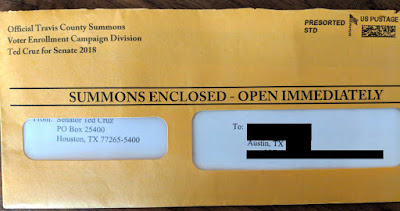 His latest stunt wasn’t just deceiving, one State Representative believes it violated Texas law. Cruz mailed a fundraising letter which looked on the surfaces as a summons. He could have sent a letter with a picture of him standing in the Senate shutting down the government, or maybe a picture of him defending his wife from Trump, but instead he used a method of deception. Many of us can smell a rat an envelope away but others may be fooled into opening this solicitation. From the Austin Statesman:

“Received this for my 88-year-old grandma,” Owen said in his post, which also shared a photo of the envelope. “Says it’s a summons from Travis County, but is actually for money for @tedcruz. Did your campaign authorize this? Is this even legal? Shame on you. That’s one more @BetoORourke voter.”

According to State Representative Gene Wu this solicitation may violate the Texas Deceptive Trade Practices Act:

“A person commits an offense if the person recklessly causes to be delivered to another any document that simulates a summons, complaint, judgment or other court process with the intent to: (1) induce payment of a claim from another person; or (2) cause another to: (A) submit to the putative authority of the document; or (B) take any action or refrain from taking any action in response to the document, in compliance with the document, or on the basis of the document,” the statute states.

This entry was posted on Tuesday, September 18th, 2018 at 12:25 pm and is filed under Uncategorized. You can follow any responses to this entry through the RSS 2.0 feed. You can leave a response, or trackback from your own site.