TX Senator Ted Cruz "You can be Hispanic and a racist too!" 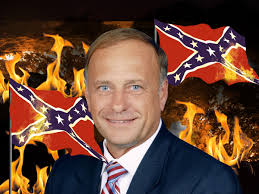 Leave it to Ted Cruz to voluntarily step in a political pile of poo.  From Bloomberg:

Representative Steve King of Iowa, who has been abandoned by Republican leaders and donors over his embrace of white nationalists and for rhetoric that has been denounced as racist, said he got a supportive phone call from Senator Ted Cruz of Texas, who’s facing a tough re-election battle of his own.

Steve King has been well known for making racist comments even on the House floor. Cruz called his latest event of embracing white nationalists as “disappointing” and “Divisive”. According to Cruz:

“I find Congressman Steve King’s comments disappointing and divisive, but I am looking towards 2020 and King can help me win in Iowa.”

Actually he didn’t say that but its as if he did. Earlier in the week, Cruz a Canadian-Cuban-American was in south Texas claiming he was more Hispanic than his challenger Beto O’Rouke, which would not be hard to say since Beto is not Hispanic. He is Irish-American and has never claimed otherwise. His name “Beto” was a nickname given to him as a child like many of his friends and kids named Roberto or Gilberto.

Cruz claiming he is Hispanic, when he hasn’t before, is strange timing considering Beto is giving him a run for his money. Also Hispanics have problems with Cruz. We stand up to bullies especially those who insult our family members like our wives. We don’t roll over and forgive very easily. We are very loyal to our families and friends. We don’t make fun of the disabled. We defend those who need help. We believe in true conservative spending. And we do not condone those who make racist statements.

Maybe Cruz ought to stick with being Canadian. If they let him.

This entry was posted on Thursday, November 1st, 2018 at 3:25 pm and is filed under Uncategorized. You can follow any responses to this entry through the RSS 2.0 feed. You can leave a response, or trackback from your own site.