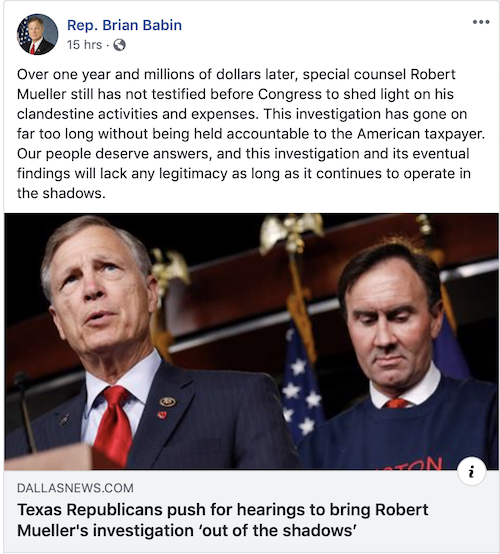 The 2016 elections are not over with counting continuing in California. Democrats are looking to end the election with a historic take of 35-40 seats in the House. The Republican leadership, as the incoming minority party, has now selected Congressman Brian Babin and Pete Olson of Texas to lead the Sour Grapes Caucus. From the Dallas Morning News:

WASHINGTON — Four Texas Republicans joined a call for special counsel Robert Mueller to testify before Congress on his investigation’s expenses as he looks into possible ties between Russia and Donald Trump’s presidential campaign.

There is just one problem with this, or actually many problems. Babin and Olson forgot they were in the majority party over the last 2 years. They had the opportunity and the ability to hold hearings, issue subpoenas, and investigate and but they didn’t. Now that they are in the minority they no longer have the power to lead committees or decide what hearings to conduct. Instead they have the authority to sit down, suck on their grapes, and shut the living hell up.

Maybe they should be put on the perpetual Hillary Hearing Committee. That will keep them busy.

This entry was posted on Thursday, November 15th, 2018 at 12:43 pm and is filed under Uncategorized. You can follow any responses to this entry through the RSS 2.0 feed. You can leave a response, or trackback from your own site.