Harris County GOP doubles down on being dicks. 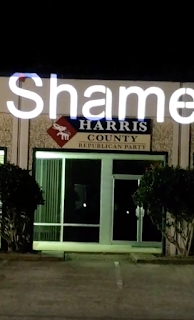 When your mouth has dug yourself a hole, do yourself a favor and shut the hell up.

The Chair of the Harris County Republican Party (HCRaP), Paul Simpson, hasn’t learned that lesson. After posting an offensive Facebook comment concerning the Holocaust Remembrance Day, being widely criticized by the media, editing the comment, then just deleting it all together, Simpson just could refrain from issuing another ill advised statement:

“A few accused the post of being anti-Semitic. It was nothing of the sort. All Americans should be on guard against the dangers of ideologies that demean the value of individual human lives to the collective. That includes socialism in all forms, whether 20th-century German National Socialism or today’s glossed-over socialism that is condoned and even promoted by those who should know better. The human suffering in today’s Cuba and Venezuela are vivid reminders that Socialism does indeed kill. Americans should not tread on the slippery slope of socialism that has always led to misery.”

Simpson’s original comment put him in the “Why do you have to be a dick about everything?” Club. It doesn’t take a moron to understand how offensive it is to take a day of remembrance where 6+million human beings were killed and use it to further your white wing cause. Even members of his own party had a comment:

OK. That was just made up. but local resident, Art Pronin responded with a Letter to the Editor in the Houston Chronicle: 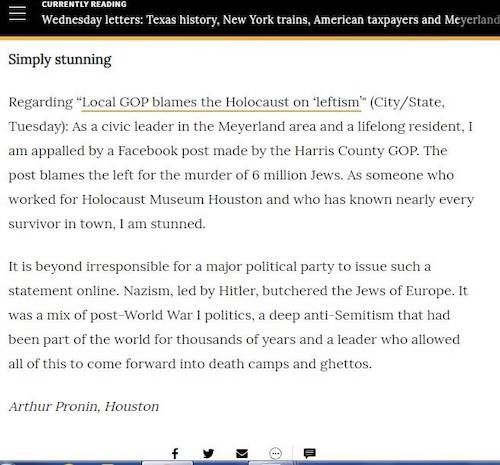 I can’t imagine what they are going to post come Memorial Day.

This entry was posted on Wednesday, January 30th, 2019 at 1:05 pm and is filed under Uncategorized. You can follow any responses to this entry through the RSS 2.0 feed. You can leave a response, or trackback from your own site.