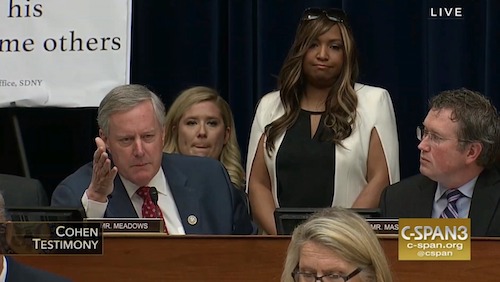 It was a jaw dropping moment watching Congressman Meadows parade out a young Black woman using her as a prop to defend Donald Trump against allegations of racism. It was one of those “He is not doing what I think he is doing” moment of the Cohen hearing. The act was just as racist as Trump turning to Native Americans during a medal ceremony and calling a sitting Senator “Pocahontas”. That wasn’t cute. It wasn’t funny. Both are racist acts.

What is even more jaw dropping is the Republican Party sitting quietly and doing nothing to condemn his act as clearly racist. It isn’t hard to do. The Native Americans on stage with Trump should have grabbed his arm and said “Mr. President we consider that as a racist and insensitive comment.” The Republican Party should do the same. Call out Meadows for his racist act.

It’s sad when you realize the Republican leadership on the committee actually approved and endorsed what he did.

This entry was posted on Friday, March 1st, 2019 at 12:35 pm and is filed under Uncategorized. You can follow any responses to this entry through the RSS 2.0 feed. You can leave a response, or trackback from your own site.