The Larry, Curly, and Moe of Harris County Department of Education 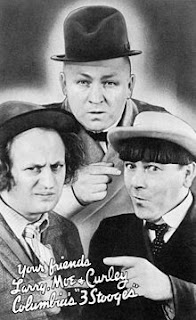 Oh. My. Gosh. Sexual harassment has hit the Harris County Department of Education (HCDE) with Larry, Curly, and Moe of the Republican Party leading the way. After reading the investigation report concerning the issue both Trustees Eric Dick and Mike Wolfe should be removed from the HCDE immediately.

Who is Larry, Curly, and Moe?
Mike Wolfe is a board member of HCDE. He was accused of sexual harassment and retaliation. The board voted to start an investigation concerning the allegations and has since completed and provided this report to the Board.

Eric Dick is also a board member. He ratted out Wolfe. The title of the investigation is “Investigation of Allegations Made by Trustee Eric Dick Against Trustee Mike Wolfe Harris County Department of Education”. In a recent email he has called Wolfe a  pervert and has called for his resignation. After reading the entire report I could not find any language that suggested he is a pervert.

The investigation clearly shows that Mike Wolfe is a pervert. He should resign immediately. If he refuses, I beg the County Attorney to file a law suit to remove him. It is unacceptable to serve as an elected official when you sexually harassed someone.” – Eric Dick

Jared Woodfill was the Chair of the Harris County Republican Party. He is representing Mike Wolfe. Woodfill’s offices were raided due to allegations of money laundering and theft. According to the Houston Chronicle:

Former Harris County Republican Party Chairman Jared Woodfill is being investigated on theft and money laundering allegations, accused of misappropriating funds of at least two of his law firm’s clients, according to an affidavit by the Harris County District Attorney’s office.

And what did they do?

According to the investigation report Eric Dick introduced Jane Doe to Wolfe who later applied for a job at HCDE. Eric later made allegations that Wolfe sexually harassed Jone Doe then retaliated against her when she refused to go out on a date with him. The investigation stated “while Mr. Dick is pleasant and chatty, he is prone to irony and drama.” (LOL) which is an understatement. Dick was also implicated in this report with recommendations to never be on a hiring committee or a committee with Wolfe in the future. Dick was also one of three members who selected possible employees that had much less experience than others who were qualified. From the report:

All the Board members confirm this: Messrs. Dick and Wolfe “got two” of their friends or “hand-picked” committee favorites and they all made the final seven, despite not having being the top seven in the objective criteria. One of Mr. Dick’s “picks” was Jane Doe. One of Mr. Wolfe’s picks was Melissa Smith, the eventual hire. Both Ms. Doe and Ms. Smith would not have even made the group of 17 if judged initially on their scores.

This in itself should disqualify Messrs [sp?] Wolfe, and Dick from serving on the HCDE Board. As the report summarized:

The process of hiring the Executive Assistant was tainted by Messrs. Dick and Wolfe. Transparency was sacrificed in the cause of political cronyism. The testing/ranking process was turned into a sham. The way Messrs. Dick and Wolfe, in particular, pushed their less-qualified friends and allies into running for the job of Board Secretary opened HCDE up to charges of favoritism and bias, caused employees to lose faith, and rendered the process arbitrary.

Dick and Wolfe had a falling out after a number of votes did not go Dick’s way. They have since been at odds. The investigator goes as far as to recommend Dick and Wolfe never serve on a committee together adding to the disfunction of the entire Board. The report has disturbing allegations against Wolfe concerning Jane Doe, enough that he should be removed from office.

And Jared Woodfill? He is defending Wolfe and in-between the petty feud between Dick and Wolfe and threatening a lawsuit if the Board votes to censure Wolfe.

Mr. Wolfe made a baseless claim that Ms. Doe sleeps around to pay her rent, during this investigation. When challenged to give a basis for this disparagement, he was unable to do so. He also makes non-credible claims of Ms. Doe “stalking” him.

This entry was posted on Monday, March 25th, 2019 at 1:03 pm and is filed under Uncategorized. You can follow any responses to this entry through the RSS 2.0 feed. You can leave a response, or trackback from your own site.