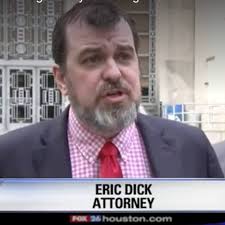 Leave it to a dick. From an email from Harris County Department of Education Trustee Eric Dick:

Harris County Department of Education’s board voted to censure Trustee Michael Wolfe over sexual harassment allegations hours after a state district judge denied his request for a temporary restraining order.

Dick has been a dick about this issue for months. He and Wolfe have had a fallout with a lot of finger pointing and allegations. The investigation recommended that Wolfe and Dick should not be involved in screening applicants for employment and should not be on a committee together. Both are like children in an adult Department working for children. In a previous email Dick said:

The investigation clearly shows that Mike Wolfe is a pervert. He should resign immediately. If he refuses, I beg the County Attorney to file a law suit to remove him. It is unacceptable to serve as an elected official when you sexually harassed someone.” – Eric Dick

The investigation he is referring to was filed by Dick against Wolfe and the recommendations included comments against Dick:

The process of hiring the Executive Assistant was tainted by Messrs. Dick and Wolfe. Transparency was sacrificed in the cause of political cronyism. The testing/ranking process was turned into a sham. The way Messrs. Dick and Wolfe, in particular, pushed their less-qualified friends and allies into running for the job of Board Secretary opened HCDE up to charges of favoritism and bias, caused employees to lose faith, and rendered the process arbitrary.

These allegations are serious and should be investigated by the Harris County Public Integrity Office. Wolfe and Dick do not deserve to be on the board.

This entry was posted on Monday, May 6th, 2019 at 2:48 pm and is filed under Uncategorized. You can follow any responses to this entry through the RSS 2.0 feed. You can leave a response, or trackback from your own site.