I had the opportunity to meet with the Harris County Clerk, Diana Trautman, and her staff to discuss combined primary voting locations. Her staff provided a demonstration of the proposed process which included a complete voting location setup with voting machines, check in tables, and the staff needed to conduct the demonstration. The demo was conducted very professionally. Great job to the entire office!

Current process
A voter enters a voting location, selects the line for their party, declares their intentions to vote in that primary, checks in, and votes. Each different process is operated by the members of that particular party.

Combined Primary Locations
The new process is operated by both parties, sitting side by side. There are no different lines for different parties. Everyone, just like in general voting, stands in the same line. Once they check in they will be asked to select which party they intend to vote in. (see pic below) This choice is presented to the voter on the iPad. The ballot is presented to the voter at the voting booth based upon the party choice. 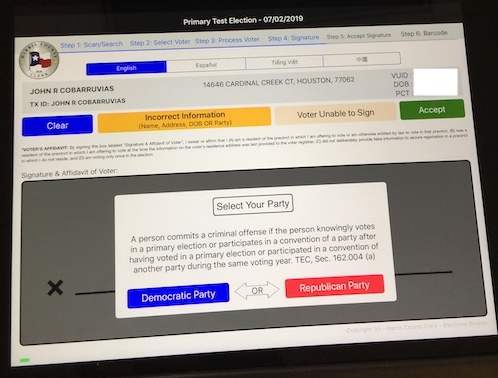 Advantages of the new process

Disadvantages of the new process?
I asked this question of the Clerk and staff. They could not identify any disadvantages. I have heard the Republican Party is concerned about solving a problem that doesn’t exist. This coming from the party that gave us Voter ID laws to address a problem that doesn’t existed. The Chair of the Republican Party had to dig deep to find something to complain about and it was based on incorrect information:

“The Democrat County Clerk’s proposed joint primary elections would empower the bureaucrats and, worse, let one party’s workers run the other party’s primary election that to selects its candidates, running the risk of disenfranchising, inconveniencing, and confusing voters.”

Whats next?
The primaries are the responsibility of each party. The Clerk’s office provides the equipment and support for the voting process. This new process must be approved by each party. Currently one party, the Democratic Party, is on board. The Republican Party is not. Hopefully that will change.

The bottom line
This process saves tax payers money. It’s more secure. It makes it easier for people to participate in the process. Who can possibly against that?

This entry was posted on Saturday, June 22nd, 2019 at 5:57 pm and is filed under Uncategorized. You can follow any responses to this entry through the RSS 2.0 feed. You can leave a response, or trackback from your own site.