UPDATE: Mr. Docefino has responded to my request to clarify his spending:

Website is free website builder, domain name I already owned, literature was in-kind after the June 30th deadline, FB ads have been bought in July, etc.Yesterday I posted about Anthony Dolcefino’s fundraising numbers. Anthony is running for City Council District C. Anthony seems to be picking up where his father left off back in 2005 by attacking Mayor Turner.

Since 2008 I have been interested in what elected officials are spending their money on in my series called Spending Campaign Cash. Here is an entry for Anthony and it is strange. I have reached out to both Anthony and his treasurer for a response.

Anthony filed a paper report because he raised less than $20,000 and does not have access to an computer. He is listed as his own treasurer and he claims to have spent $0 during this period. This is strange because he has a website, a domain name, a facebook page, a twitter account. He has made online ads and he has campaign literature with the required disclaimer “PolAds paid for by Anthony Dolcefino Campaign, Linda Fowler Treasurer”. 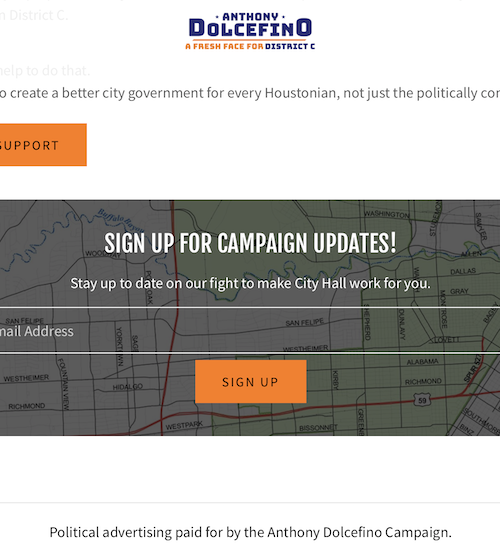 According to the Texas Ethics Commission expenditures must be reported including what was purchased, how much was paid, who was paid, when it was paid among other things. Even if the website, domain name, and campaign literature were donated, that must be reported as an in-kind donation.

Even a caveman can do it.

This entry was posted on Friday, July 19th, 2019 at 11:26 am and is filed under Uncategorized. You can follow any responses to this entry through the RSS 2.0 feed. You can leave a response, or trackback from your own site.