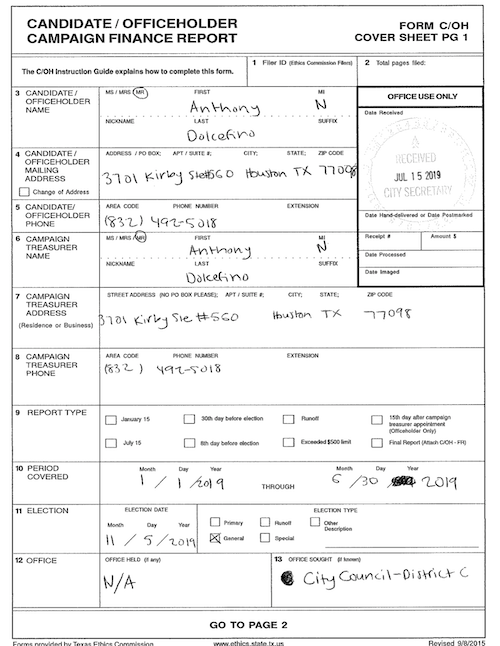 I was looking at campaign finance reports for Houston City Council races that voters in District E would be interested in. You can view that here if you would like. I also became curious about a couple of other candidates, one being Anthony Dolcefino, the son of Wayne Dolcefino. From a previous post;

But back to campaign reports….I couldn’t find his reports online until today with the help of Shelby. He filed a paper copy. Based upon his totals I would have too. You can find his complete report (all 6 pages worth) here. I can summarize.

He has raised $2836 of which $1086 was in-kind donations provided by his father. He has recorded $0 spent even though he has put out a couple of political ads, printed door hangers, and has a website. all “Political advertising paid for by the Anthony Dolcefino Campaign.” His father only gave him $500.

His affidavit claims he nor anyone associated with his campaign uses computers to keep track of his donations.

He also delivered the hand written report by horse and carriage since no one has a car.

This entry was posted on Thursday, July 18th, 2019 at 4:18 pm and is filed under Uncategorized. You can follow any responses to this entry through the RSS 2.0 feed. You can leave a response, or trackback from your own site.