It just doesn’t get anymore dishonest than this and it’s not his first time either.

Bill King sent out a mailer in the Kingwood area listing some Democratic precinct chairs as endorsing him for Mayor. The office is a non partisan race and precinct chairs can endorse in this race. Unfortunately, some on his mailer did not endorse and would not endorse him and they called him out on it.

That was a couple of weeks ago. Obviously King has learned that dishonesty and lies championed by Trump can work so he did it again, this time in Clear Lake. Again some Democratic precinct chairs were listed as endorsing him, as well as a well known journalist who has not endorsed and cannot endorsement due to her profession. That person is not happy and shouldn’t be. I’m not sure if this is illegal, but it should be. Regardless it is a deliberate, dishonest attempt to sway voters. 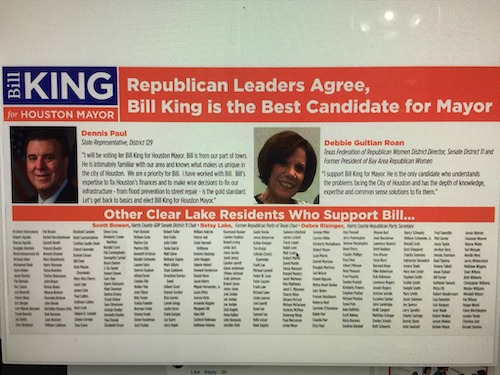 Earlier in the year King, running his second campaign for mayor, used campaign literature that did not have the necessary disclosures. It’s almost like the man running against corruption can’t follow the law.-

Bill King ran for Mayor of Houston 4 years ago. You would think his campaign would know that the “Political Advertisement Paid for by” requirement applies to all candidates. King’s campaign was in the neighborhood putting out door hangers without the necessary disclosure requirement. King might want to review the following section of Title 15 Election Code:

This entry was posted on Wednesday, August 21st, 2019 at 3:41 pm and is filed under Uncategorized. You can follow any responses to this entry through the RSS 2.0 feed. You can leave a response, or trackback from your own site.