Anyone else getting Dicked via text msg? 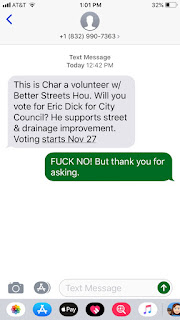 I met Eric Dick when he first ran for Houston City Council. I didn’t like him then. I don’t like him now. He is the kind of guy that would suck up to anyone and say anything to get a vote. Ask the Houston Fire Fighters Union. He probably told them he would vote for their 29% increase in pay even though he has no idea how to pay for it.

Dick has had a drama filled few years on the Harris County Dept of Education calling his republican buddy, Mike Wolfe, a “pervert” and asking for an investigation into his hiring process. The investigation resulted in Dick being put in time out and a recommended that Dick should not serve on a committee with Wolfe.

So, it bothers me when I and others get unsolicited text messages from “Char”, a volunteer with Better Streets Hou, a group I cannot find on the net. Needless to say someone had a snappy response.

If there was a way to file a complaint on Dick, I would. He truly is a dick.

This entry was posted on Friday, November 22nd, 2019 at 12:35 pm and is filed under Uncategorized. You can follow any responses to this entry through the RSS 2.0 feed. You can leave a response, or trackback from your own site.