As they say “When he tells you who he is, believe him.”

This weekend Chick-Fil-A announced it would discontinue donations to anti-gay organizations. According to Fox News:

Chick-fil-A has announced it will focus on donating to initiatives that further its “mission of nourishing the potential in every child” in 2020 — and that it will no longer be giving to two organizations that it had previously received backlash for donating to in previous years: the Fellowship of Christian Athletes and The Salvation Army.

Texas Governor Greg Abbott had to be a dick in a tweet issued shortly after the announcement. 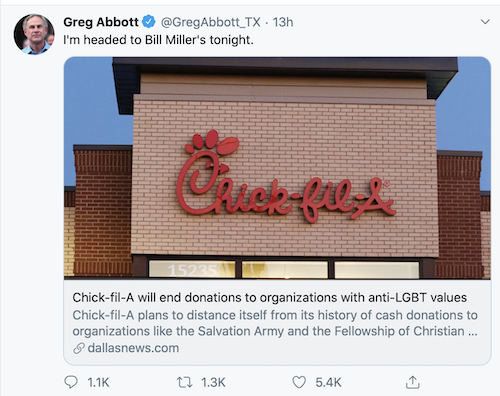 This entry was posted on Tuesday, November 19th, 2019 at 1:31 pm and is filed under Uncategorized. You can follow any responses to this entry through the RSS 2.0 feed. You can leave a response, or trackback from your own site.

One Response to Texas Gov Greg Abbott is truly crippled