Who paid for the misleading ads from Harris County Black Democratic News?

Eric Dick donated $8,500 to the “Harris County Democratic News” located at 1918 Freeman Houston Texas 77009. Recently a flyer was distributed with endorsements from the HCDN on one side, which includes Eric Dick, and pictures of prominent elected officials including President Obama, and State Representative Senfronia Thompson as if they have endorsed him. This misleading mailer prompted a statement from Representative Thompson:

“Let me set the record straight. In this upcoming Run-off Election, I have only endorsed Mayor Sylvester Turner, Dr. Letitia Plummer, Sallie Alcorn and Rhonda Skillern-Jones,” said an outraged State Representative Senfronia Thompson. “I have never been contacted by the Harris County Black Democratic News nor am I sure that they are a legitimate news or community organization. I did not consent to being included in the Harris County Black Democratic News and am appalled that a group would go to this extent to mislead voters. Other black elected officials are experiencing the same shock as to the gall of the group to use their name and photo to mislead the voters.”

This is NOT the first time Eric Dick has done this. When he first ran for City Council he sent a mailer with pictures he took with various elected officials implying they endorsed him. 10 years later he is doing it again. There is very little information available at this organization except Whois. This organization is registered to Phillip Bryant of the Island of Hope Church at 1918 Freeman. 832-267-9936. Here is the Whois entry. The website is nothing more than a sign in sheet for their “news” with a picture of President Obama. 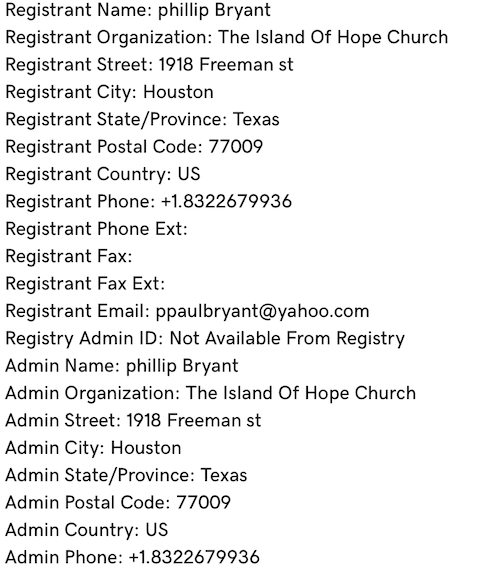 This entry was posted on Saturday, November 30th, 2019 at 5:12 pm and is filed under Uncategorized. You can follow any responses to this entry through the RSS 2.0 feed. You can leave a response, or trackback from your own site.