Another Texas Republican asked to resign over racist text

There is more to this.

Back in March the Chair of the Galveston County Republican Party referred to a Black activist as a “Typical Nig”. Today, a full 8 months later, she has been asked to resign by the Governor and the GOP. 8 months later.

So the question has to be be asked, when did they know it, and when did they decide to just ignore the racist text by a republican party official? Not only is the text worthy of resignation by the Chair, but also those who knew about it and did nothing about it. If nothing else they should have stood up and immediately condemned her text and asked her to step down.

The Texas Republican Party has had a problem reaching out to the non-white voters. Putting Latino children in cages, making racist comments about Asian Americans, and referring to a Black activist as a “typical nig” is just typical of the party of trump.

And the response from the Chair: 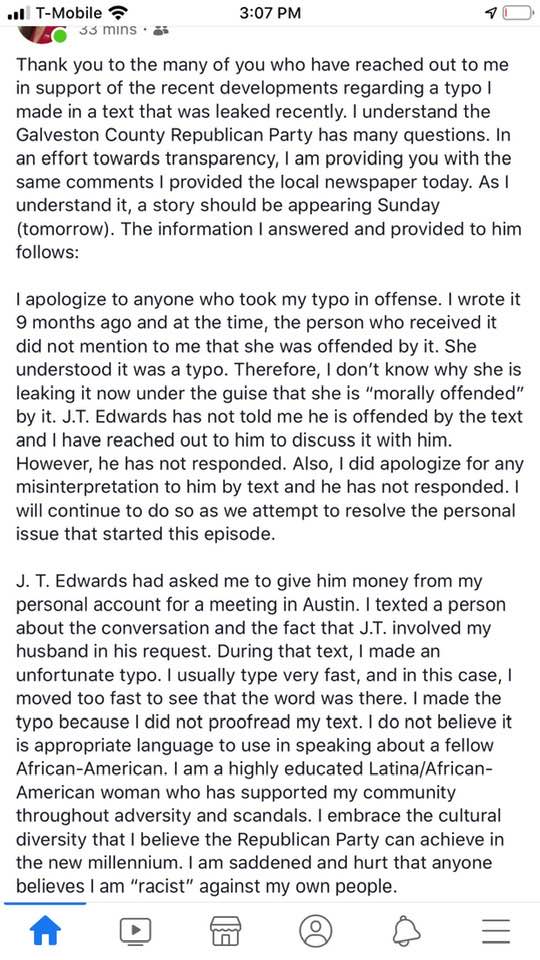 This entry was posted on Saturday, December 7th, 2019 at 8:50 pm and is filed under Uncategorized. You can follow any responses to this entry through the RSS 2.0 feed. You can leave a response, or trackback from your own site.