The calls for the resignation of the chair of the Galveston County Republican Party continue except from the official party itself. Instead, after being silenced by their own party, precinct chairs, independent of the party, has written a statement calling for the Chair’s resignation.

“We strongly condemn intolerance, bigotry, or racism in any manner.” (except for Mexicans, Muslims, Blacks, Asian Americans, and anyone that isn’t white, but other than that they will not tolerate racism!) 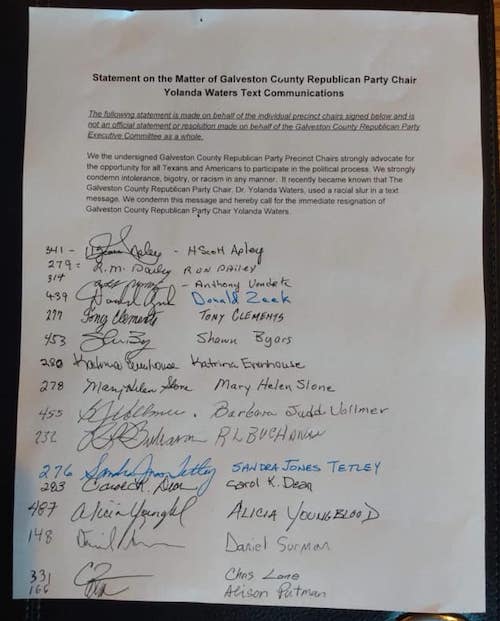 This is a statement from the Galveston County Republican Party Precinct Chairs regarding the actions of the County Chair Yolanda Waters:

Many of us precinct chairs had hoped to formally address the matter regarding the County Chair’s inappropriate text communications through an official party meeting. Previous attempts to address our concerns were met with equivocation and defiance. The County Chair chose to squash the latest effort through an opinion from GCRP Attorney Tom Dickens that called the meeting call “defective and therefore void.” The opinion further suggested she “file suit and ask the Court to enter a Temporary Restraining Order” against the Precinct Chairs who called for the meeting.

Given these efforts to silence the Precinct Chairs, we instead chose to informally dine together at the previously chosen location. A consensus emerged from those Precinct Chairs in attendance to sign on to the following letter regarding the text communications of our County Chair. The short version is that it calls for the resignation of the County Chair; the full text is below:

It was signed by 16 Precinct Chairs in attendance, and others have since indicated their desire to sign.

The Galveston Daily News just published an article about this issue. We submitted a copy of this letter to the Daily News, and we have informed them there will be more signatures to add as we contact those who did not have the opportunity to meet us for lunch today.

This entry was posted on Sunday, December 8th, 2019 at 1:13 pm and is filed under Uncategorized. You can follow any responses to this entry through the RSS 2.0 feed. You can leave a response, or trackback from your own site.