GOP do yourself a favor. Remove Trump 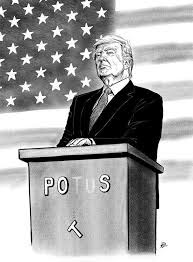 You have been given a gift. Take it.
At the end of 2019 the Democrats in the House of Representatives gave the Republican Party a great gift, they impeached their leader, Donald Trump. They have since sent the articles of impeachment to the United States Senate and have given the Republicans a huge opportunity to save their party, their candidates running for re-election, and their dignity.
Donald Trump is a malignant growth on the once great Republican Party. He easily infected the members of the far-right Tea Party members and the remaining so-called conservatives. Prior to Trump, the Grand Old Party defended the Constitution, upheld law and order, advocated for fiscal responsibility, and promoted “conservative” American values. Now the GOP tolerates a leader of the greatest country in the world that lies every single day, mocks the disabled, tolerates racism, runs up a trillion-dollar deficit, adds $3 trillion to our national debt, coddles our enemies, and shreds the Constitution on a daily basis. Americans have slowly watched the “Party of Lincoln” dissolve into a party of liars, racists, fiscally irresponsible defenders of Mother Russia. It truly is sad.
But the Democrats have provided the Republican Party a way to save their party from the voters in the 2020 elections. There is no need to put Americans through an impeachment trial in the Senate. There is no need for Americans to watch on live TV as the Republicans in the Senate tuck tail, bow their heads, and defend this politically ignorant, law breaking, rotten human being. Instead the Republican leadership should visit with Trump and provide him an option to either leave on his own or be removed from office. The Republicans in the Senate have the upper hand in this negotiation. They have been given a golden opportunity to remove this growth from their Party and they should take it. They can convince Trump to resign and then let him blame it on the witch hunt, the Democrats, the media, and the deep state in order to save his own face.
By convincing Trump to save face the Republicans can possibly save their party from being wiped out in the 2020 elections. The elections of 2018 should give them an idea of what is coming. In 2018 Republicans lost control of the House by a wide margin. Many Republicans, including some in Texas, have decided to quit instead of facing voters again in 2020. State Houses have been flipped even with heavily gerrymandered districts. Voter turnout was at historic highs for a midterm election. Locally, voters in Harris County wiped out every Republican judge from office. Harris County Commissioners Court flipped to Democratic control for the first time in decades.  The Democrats are now targeting for control of the Texas House. All indicators lead to another wipe out of the remaining Republicans in office in 2020. The Republican Party needs to do something.
There is offer on the table from the Democrats. The Republican leadership should take the offer, remove this growth called Donald Trump from their Party, take their chances with Vice President Pence, and hopefully have an opportunity to repair and rebuild their once great Party of Lincoln.
Or they can take their chances with the voters in 2020. They shouldn’t gamble. Accept the offer. Remove Trump from the office of the President of the United States.

This entry was posted on Tuesday, January 21st, 2020 at 1:44 pm and is filed under Uncategorized. You can follow any responses to this entry through the RSS 2.0 feed. You can leave a response, or trackback from your own site.