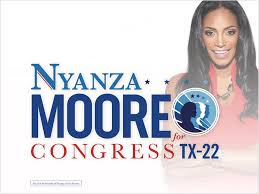 This just can’t be good for Texas Congressional District 22 Candidate Nyanza Moore especially since she will be on the debate stage this Saturday with her opponent and the plaintiff of a defamation suit against her.

CD22 has 2 outstanding candidates running in the Democratic Primary, Sri Preston Kulkarni and Derrick Reed. Nyanza Moore is a “progressive” political commentator on FOX-26 Houston’s “What’s Your Point,” and entered the race early this year. Nyanza has recently posted some nasty attacks against Council Member Reed on Facebook. I only heard about the attacks and didn’t think more of it until yesterday. They are truly nasty attacks. Turns out Reed isn’t playing with the allegations, Nyanza, or her friends and has filed suit against Nyanza Moore and Friends of Nyanza Moore.

Nyanza entered the race against an established and hard working candidate Sri Preston Kulkarni. Sri has boots on the ground and a campaign structure in place already. Nyanza cannot raise adequate funds to build her campaign. She was out raised 10-1. She has made comments about the gay community that were not appreciated and her friends accused a group of racism when she was not recommended for endorsement. (I was on the end of that accusation)

So now Nyanza faces a suit in Brazoria County and will have the opportunity to back up her attacks with facts. 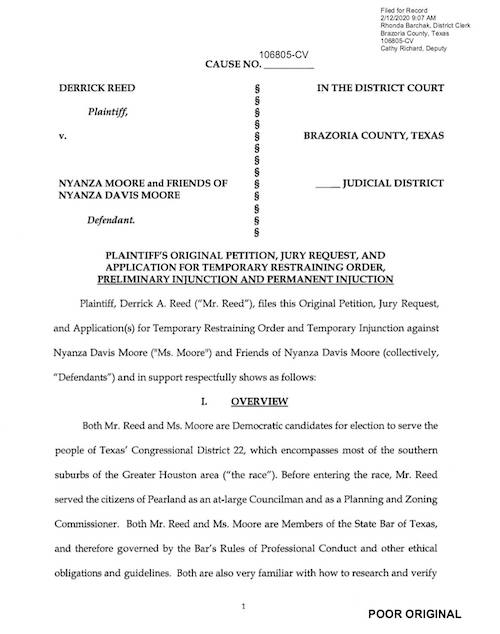 This entry was posted on Thursday, February 13th, 2020 at 12:31 pm and is filed under Uncategorized. You can follow any responses to this entry through the RSS 2.0 feed. You can leave a response, or trackback from your own site.