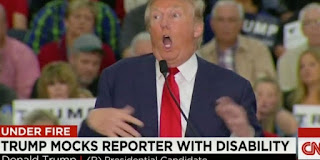 Gregg Abbott has some balls to be offended by being mocked for his disability by two staffers from Empower Texas caught on an open mic. From The Texas Tribune:

An Abbott spokesman denounced the comments by Cheshire and McDonald. “It reveals a lot about an organization’s character and morals that uses profanity to mock a person in a wheelchair, and this audio is disgusting and hate-filled,” Abbott spokesman John Wittman said in a statement. “It is sad to think about what else this group may be saying about people behind their backs when they think they aren’t being recorded.

Empower Texas is the same group Abbott has supported as they stacked the Legislature with far white wing radicals such as Jonathon Stickland, Tony Tinderholt, and Little Baby Briscoe Cain. This is the same group that Abbott has supported as they passed far right wing legislation such as open carry of firearms.
Abbott and Empower Texas both have supported a president who has mocked a disabled reporter on live TV and now Abbott is whining about being mocked himself? It’s not fun when the morally bankrupt individuals like Trump, people who you have supported and encouraged, turned their ire towards you.
Abbott has no moral authority to complain. He should sit down, shut up, and take what he deserves from his own party.

This entry was posted on Monday, June 22nd, 2020 at 11:41 am and is filed under Uncategorized. You can follow any responses to this entry through the RSS 2.0 feed. You can leave a response, or trackback from your own site.