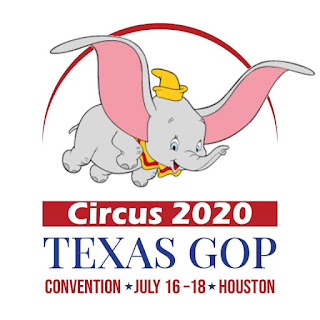 The Texas Republican Party should consider changing their logo to represent their convention and their new party.

Yesterday during their online/offline screwed up convention some of the delegates ousted their current Chair and voted in a perfect individual who will represent the Texas Republican party very well, former Congressman from Florida Allen West. West has been certified by the National Association of Nut Makers as 100% nuts. “After reviewing West’s record we can say with 100% accuracy that West is a perfect individual to lead the members of the Texas Republican Party. Just like Donald Trump he truly is one f*cked up human being.”

The GOP Convention has been a joke from day one, mired in technical difficulties, reboots, with many just giving up trying to participate. It is fitting that those who were able to actually gain access to vote elected someone like West to be their leader. He began his career in Florida and served in Congress as one of the tea baggers of 2010. He served only 1 term. He was endorsed by Sarah Palin and Ted Nugent. He will serve Donald Trump and his extreme right wing agenda very well.

This entry was posted on Tuesday, July 21st, 2020 at 12:58 pm and is filed under Uncategorized. You can follow any responses to this entry through the RSS 2.0 feed. You can leave a response, or trackback from your own site.