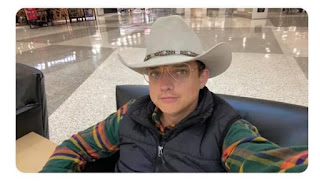 November 8, 2020 Houston, Texas. Texas State Representative Briscoe Cain was held and questioned when attempting to board a flight from Houston to Philadelphia. According to Homeland Security Officials Cain was held for over an hour prior to the flight. From a spokesman:

We were alerted to the issue by an anonymous posting on Facebook. The picture of Cain raises serious questions about the safety and liability of the airline and required immediate attention. A review of his twitter feed confirmed our suspicions. We held Cain for approximately 1 hour to verify his identification. He would have been released much sooner but we were unable to contact his mother to verify his age.

Homeland Security has strict protocols concerning a minor flying alone. Out of an abundance of caution we held Cain back until he could prove he wasn’t a 12 year old or acted like one.

This entry was posted on Monday, November 9th, 2020 at 3:10 pm and is filed under Uncategorized. You can follow any responses to this entry through the RSS 2.0 feed. You can leave a response, or trackback from your own site.