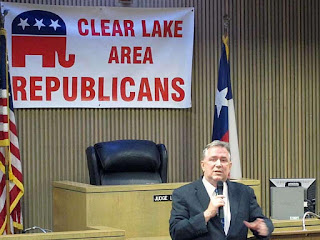 There is no bottom to this man.

Yesterday Trump pardoned a group of criminals including the former worthless Congressman Steve Stockman. Stockman represented the Clear Lake area for two terms, 16 years apart. Over those couple of years his accomplishments were few, if any, besides tweeting like a 2 year old.

In 2017 Stockman was convicted on 23 out of 24 charges concerning an elaborate scheme to steal money from donations and a charity. It was so bad his own staff testified against him. He was sentenced to 10 years in jail. Yesterday his prayers were answered and he was pardoned. Stockman will remain a felon. He will not be able to own a gun which in itself is a jail sentence for a gun nut like Stockman.

Stockman is a poster child for redistricting reform. After Stockman quit his seat to challenge Cornyn in 2014 Brian Babin took his place. As I said in a previous post:

The district is Babin’s too keep until he retires, dies, or ends up in jail. It doesn’t matter what kind of lies Babin will tell his constituents, or how racist he may seem he will remain in office. His district is a 70/30 split giving a well financed Democrat about a 30% or less of the vote, every time. 2018 was no different.

Watch for Stockman to join Fox News, Qanon, or Newsmax.

This entry was posted on Wednesday, December 23rd, 2020 at 1:13 pm and is filed under Uncategorized. You can follow any responses to this entry through the RSS 2.0 feed. You can leave a response, or trackback from your own site.