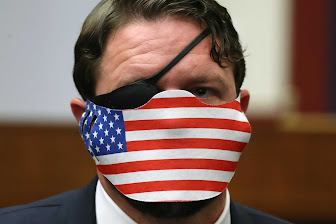 Pussies. Every single one of them.

In a heated argument Trump told his Vice President that he could go down as a Patriot or a Pussy when it comes to overthrowing the election. Congress Members had the same options when it came to impeaching Trump for insurrection  They could be a Patriot or a bunch of scared little pussies. The Republicans in Texas chose to be pussies.

According to the Houston Chronicle the following republicans were afraid of their own party, and are still afraid of Trump:

Rep. Dan Crenshaw, R-Houston Crenshaw said he couldn’t support impeachment because the process lacked a “sober review of the facts.” He added that Trump at his rally outside the White House last week “whipped many of those present into a frenzy that contributed, in part, to the assault on the Capitol resulting in the deaths of several American citizens, including at least one Capitol Hill police officer.”

Rep. Brian Babin, R-Woodville “This impeachment is purely about political posturing and a catchy CNN headline — it’s a disgrace,” Babin said. “Our 240-plus years of proud history and those who died to ensure America was victorious through its many trials deserve better than the mockery unfolding before us today in Congress.”

Rep. Kevin Brady, R-The Woodlands “Those calling for impeachment or invoking the 25th Amendment in response to President Trump’s rhetoric this week are themselves engaging in intemperate and inflammatory language and calling for action that is equally irresponsible and could well incite further violence,” Brady said. “They are placing a desire for vengeance above the best interests of the country. President-elect Joe Biden is right to reject calls to go down this dangerous path which will only further divide the country.”

Rep. Michael Burgess, R-Pilot Point “The rioters who stormed the Capitol were wrong and should be held accountable, but it is time for America to heal,” Burgess said. “In less than a week, President Trump will be leaving office and President-elect Biden will be sworn into office. Continuing to pursue impeachment will just further increase the partisan divide.”

Rep. Michael Cloud, R-Victoria “Sadly, under current Democratic leadership, impeachment has become a politicized tool — part of the cancel culture movement of the left to silence dissent,” Cloud said. “With only one week until Inauguration Day, it is not in the best interest of the nation to move forward in this way.”

Rep. Pat Fallon, R-Sherman “Just addressed the House Chamber for the very first time to speak AGAINST this silly & wasteful resolution to invoke the 25th Amendment to remove the President with only a week left in office,” Fallon wrote on Facebook. “Surreal that DC is this hyper-partisan. Sad. Let’s work for ALL Americans and stop this ridiculous infighting. #Enough! #GodBlessAmerica.”

Rep. Louie Gohmert, R-Tyler Gohmert said impeaching the president without an investigation or committee hearings sets a dangerous precedent.“Now the message is, if you have a whim and you want to just go after a president, just go straight to the floor, no investigation, no judiciary committee,” Gohmert said. “Use it as a political weapon as you wish.”

Rep. Tony Gonzales, R-San Antonio “America needs a steady hand to calm our nation’s unrest. Today’s vote on impeachment was another partisan move forced by Nancy Pelosi,” Gonzales said in a statement. “With one week left in President Trump’s term, the latest efforts to impeach the president does nothing to heal our country.””We are bitterly divided right now – and this effort only worsens that divide.”

Rep. Michael McCaul, R-Austin McCaul said he opposed impeachment “with a heavy heart” because “rushed justice is not the solution to mob violence.” “I did not come to this decision lightly,” McCaul said. “And I truly fear there may be more facts that come to light in the future that will put me on the wrong side of this debate.”

Rep. Troy Nehls, R-Richmond “This impeachment is rushed, preempts any semblance of a proper inquiry into what occurred on January 6th, and throws fuel on the fire of division at a time our country so desperately needs unity and healing,” Nehls said. “The American people want us focused on COVID-19 relief and the economy, not impeachment.”

Rep. Chip Roy, R-Austin “The President of the United States deserves universal condemnation for what was clearly in my opinion impeachable conduct: Pressuring the vice president to violate his oath to the Constitution to count the electors,” Roy said. “Unfortunately my Democratic colleagues drafted articles that I believe are flawed and unsupportable.”

Rep. Van Taylor, R-Plano “Impeachment of a President, elected by the American people, requires thorough investigation, Congressional hearings, and thoughtful deliberation,” Taylor said. “We must not allow our Republic to devolve to the point of allowing impeachment, and subsequent removal, of a sitting president based on news reports and social media pundits.”

Rep. Beth Van Duyne, R-Irving “I should be in my district working for my constituents, instead I’m back here in Washington because the majority couldn’t resist another made-for-TV impeachment.”

Rep. Randy Weber, R-Friendswood “Temperatures are still running high and the FBI says more violence is threatened,” Weber said. “Now with only eight days remaining in President Trump’s term, attempting to invoke the 25th Amendment or impeaching the president or any other measure attempting to remove him from office will only add fuel to the fire.”

Rep. Roger Williams, R-Austin “Today’s rushed vote on impeachment will only further divide the American people,” Williams said. “There will be a peaceful transfer of power on January 20, 2021 — we must move forward for the good of the Republic.”

Rep. Ron Wright, R-Arlington “It’s time that we all come together, not as Democrats and Republicans, but as Americans,” Wright said. “Abandoning norms and traditions to impeach President Trump with less than ten days left in his term will only cause more hatred and division across our communities.”

This entry was posted on Thursday, January 14th, 2021 at 10:30 pm and is filed under Uncategorized. You can follow any responses to this entry through the RSS 2.0 feed. You can leave a response, or trackback from your own site.