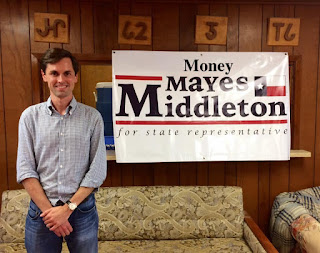 Texas Representative “Money” Mayes Middleton of Galveston spent over $2.5 million of his own money to win a seat in the Texas House. If this race was competitive, and it wasn’t,  he would have needed about $500,000 to win. His opponent raised only $4000 and had absolutely no idea what it meant to run besides running. So Money Mayes won and is doing the bidding of the Republican Party to limit access to voting.

Money Mayes has filed House Bill 1026 which will remove deputy voter registrars from registering voters on behalf of the county. VDRs reach out to potential voters to help them register. They are responsible for registering the vast majority of new voters. They are required to train every 2 years and there are serious consequences for breaking the rules of the program. I personally have never heard about any abuse of this program but that doesn’t stop Money Mayes.

I am sure Money will say something like “I’m protecting the sanctity of the vote” or something like that. Money really should look up the word sanctity as in the “sanctity of marriage” when it comes to Donald Trump. LOL They have no idea what the word means

Watch for other Representatives like Dennis Paul HD129 to co-sponsor this stupidity. You can track this and other bills at LegiScan.

This entry was posted on Monday, January 18th, 2021 at 12:46 pm and is filed under Uncategorized. You can follow any responses to this entry through the RSS 2.0 feed. You can leave a response, or trackback from your own site.