Houston City Councilman Greg Travis has a lot of time on his hands since he quit all of his committee assignments, leaving the work to others on Council. Texans have a name for this. Deadwood. Excess baggage. Expendible. Lazy bastard.

With time on his hands Travis uses his official twitter account for extreme far right partisan politics. Some called for his removal after posting racist comments. Others called for his removal from his committee assignments but he voluntarily removed himself before shooting his mouth off. His latest tweet calls for installing cameras in classrooms to spy on teachers. 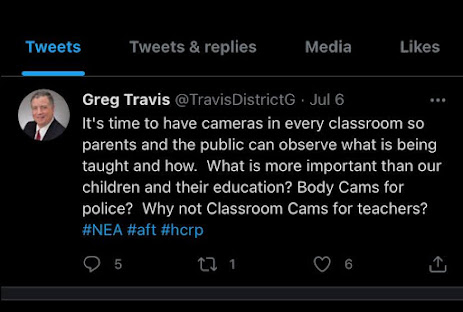 Travis will complete his time on Council as deadwood or will quit like the twitter coward he is. Until then he will continue to try to sow division instead of unity or solving problems. He will continue to disrupt just like his buddy, loser trump.

This entry was posted on Thursday, July 8th, 2021 at 10:59 am and is filed under Uncategorized. You can follow any responses to this entry through the RSS 2.0 feed. You can leave a response, or trackback from your own site.