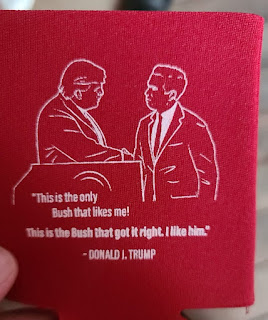 Mexican Americans do not like ass kissers, a “Lambiache”. There is nothing worse than a kiss ass like Ted Cruz, or Ken Paxton, or George P Bush all trying to lick Trump’s ass in order to gain favor or in Bush’s case, an endorsement. It didn’t work.

Yesterday Trump endorsed the indicted Ken Paxton for Texas Attorney General. Paxton’s ass kissing was what legends are made of. He led the suit to overturn the election which was quickly thrown out. He led the fight to curb mail in ballots and drop off ballots during COVID crisis. For this he gained favor. According to Trump:

Ken Paxton did a much better job sucking up to me and kissing my big fat ass. Bush was bush league.

Bush, on the other hand, was dealt a fart in the face even after making cute little coozies and posting a selfie sucking up to Trump on the phone. It’s embarrassing and it was all for naught.

So in the race for ass kisser, Paxton advances to the finals with Greg Abbott.

This entry was posted on Tuesday, July 27th, 2021 at 12:21 pm and is filed under Uncategorized. You can follow any responses to this entry through the RSS 2.0 feed. You can leave a response, or trackback from your own site.