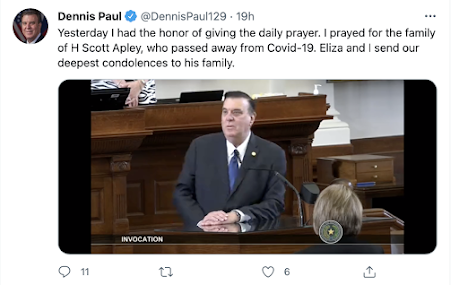 As you know I live a block from you in the Bay Knoll subdivision. I am sorry to hear about the passing of your friend and State Republican Executive Committee Member, Scott Apley, from COVID. He leaves behind a wife, who is also COVID positive, and an infant child. Unfortunately you and your party are responsible for his death and you should ask for forgiveness next Sunday at St. Bernadettes.

Your party has failed Mr Apley by allowing misinformation to be spread by your members. You party has failed over 53,000 families in the state by not taking this pandemic seriously. You allowed members of your party, “conservative” leaders in the community, and elected officials, such as Mr. Apley to mock science, downplay the severity of the virus, spread rumors, and fight every move by every elected official to stop this deadly virus in its track. You, personally failed Mr. Apley.

The death of your friend is on your hands. Instead of offering worthless thoughts and prayers you should offer an apology to Mr. Apley’s family and to the 50,000+ families who have lost their lives because of your cowardness. I am truly ashamed of you.

May God forgive you.

This entry was posted on Friday, August 6th, 2021 at 11:48 am and is filed under Uncategorized. You can follow any responses to this entry through the RSS 2.0 feed. You can leave a response, or trackback from your own site.